Update - Since GH Actions entered general acceptance, the API has changed entirely without any respect to the previous model. This article is effectively deprecated, but I encourage readers to continue if you are interested in what Actions used to be. A follow-up piece will be drafted soon with the new workflow API. Spoiler, it took a ridiculous effort to migrate and is tedious in general.

Months ago, I signed up for the GitHub Actions beta, a feature that allows you to hook CI actions directly into GitHub. Instead of using tools like Drone, CircleCI, or Wercker, you can simply add a .workflow file to your git repo and reference a few container images to build and ship your product within the git lifecycle. Recently GitHub approved my beta access, and I was eager to take this feature for a test drive.

I went the GitHub repository for this website and opened the new “Actions” page. Inside, I found the workflow editor. The editor is a UI experience for adding and connecting actions in a workflow. It has some good features like discovering pre-made actions for platforms like AWS or Heroku. Another useful feature is that when an workflow is triggered, you can watch its status from the UI and review logs from each individual step as it completes.

However, I did not find the editor was entirely easy to use. Making connections seemed awkward at times, and if the actual workflow file was malformed, then vague errors showed on the UI. I found editing the main.workflow file directly was easier to do once I understood the syntax, but GitHub also offers a view for you to edit the file directly from the Actions page.

I originally wanted to automate the process of publishing this blog with GitHub. I am using Hugo which allows me to use templates for the view layer of the app while I write most of the content is simple Markdown files. Hugo will bind my content to the templates and generate a static site from it. My workflow for publishing was fairly simple.

To automate this, I needed to define a GitHub workflow that builds the website after changes are pushed and deploys the generated site to the internet. I found one step of the process was readily available; GitHub has an accepted action for Firebase integration. I added this using the UI editor, and linked it to my Firebase project. 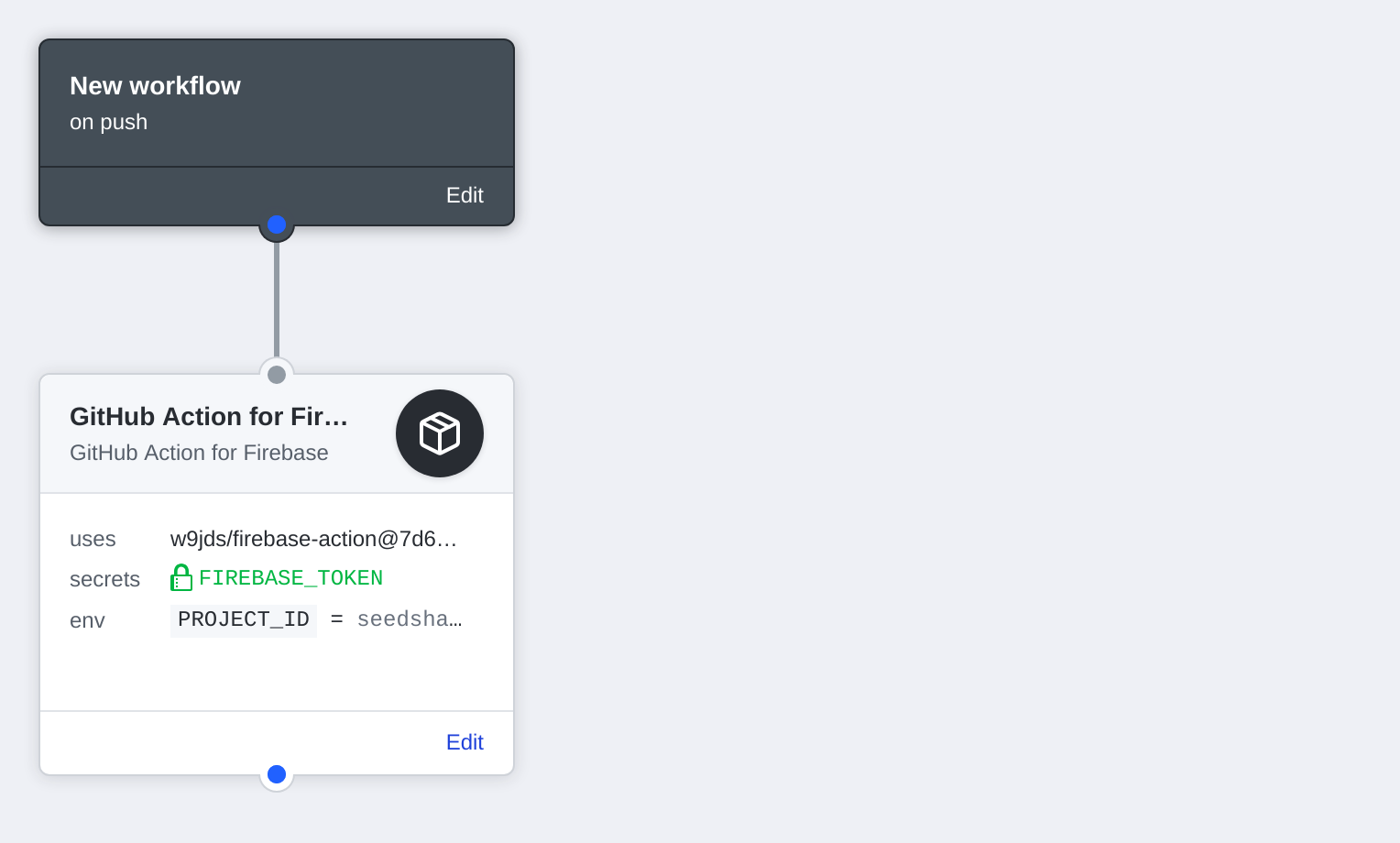 At this point, my main.workflow file was updated to a new state. That is, the changes I made in the editor were manifested in the actual file. I even made a new commit to the repository with this update.

However, this only offers deploying my site automatically. I have yet to build the static site from the Hugo project. I could just build locally with Hugo and push my builds to the repository as well, but I prefer to automate it. I decided to experiment with developing a custom action to build the site with Hugo.

For building my static site automatically on git push I wrote my own custom action for Hugo. This process was simple, and I found GitHub's documentation on custom actions to be extremely helpful. To build my action, I created a docker image that could run the hugo command that builds this site.

Since Hugo is a Go program, I used the Go Alpine Linux base image. Then, I installed Git, the GCC compiler, and the musl standard library. With this toolkit, I can pull the OSS Hugo codebase and build it inside the container with a go install command. I added a litany of LABEL statements as well, as recommended by GitHub for describing the component.

Arguably, the “action” is really designed in the entrypoint.sh script, and the Docker image is just the structure around it. In my script, I had a hugo command to build the site from the codebase. GitHub will mount the repository to the running container as the working directory, so assume your action will run from the base of the project and don't set WORKDIR in the image. I added my Hugo action to the workflow and did git push to test it.

In the Actions UI, I could watch the execution, which may take a few minutes. Also, the UI produced logs for the actions for debugging, which became useful because I failed several times at first. In my workflow file, I added a “needs” parameter to the Firebase action. Making it depend on my Hugo action causes my action to run first. It's an awkward part of the API where you designate terminal actions at the top-level of the workflow and stumble backwards through the process, retrofitting antecedents. Others may defend this API, but I thought it was a specially uninspired case for DX.

UI view at runtime is pretty

Eventually, I discovered the critical bug. When GitHub runs the action, it mounts my codebase to the container, but I have a git submodule in the themes directory of my project. With Hugo, submodules are commonly used to link themes. Cloning a repository does not automatically pull submodules though by default. I fixed this by doing the pull in my entrypoint.sh script.

After fixing this, and other bugs, I finally deployed my site through actions. It actually felt great knowing that my blog will be deployed automatically. No more will I need to manually publish my site. In fact, when I write this post, I'll be publishing it through my new GitHub Actions CD pipeline. I recommend Actions for developers looking to automate their workflow. Designing portable, custom actions with docker, which can be shared with others, is the value-add.

if you are reading this it worked